Since my last post, the baby finally decided to make her grand appearance… I’ve been too busy snuggling her, gazing at her, and nursing her to do anything in the way of blog updates since then. Also, I’ve been on the phone a lot, catching up with friends. Today one of my friends and I had this exchange.

Me: Oh my god, it was epic. I was being pretty patient overall, as far as being waaaay past my due date, but by Thursday I was losing it. Wednesday night I thought my water broke, and then I went to the doctor and they said everything looked great and if my water broke, the baby would come anytime. Then I went to my midwife and she tested me and it turned out my water really didn’t break.

At that point, my mom had been visiting for over ten days and we were starting to grate on each other, I still didn’t have a baby, and I was having a major, major meltdown. Every visit we’d had since about 38 weeks, I asked my midwife if she thought I would have the baby soon and she kept saying she didn’t think I was “grumpy enough” yet. I guess Thursday I hit the mark on the grump-o-meter… My mom and I went to a reading by an author I really like and as we were leaving the bookstore, I had some intense back pain, which turned out to be the beginning of labor. I was able to go home and rest, but by about 1am I was totally awake, and the contractions were gradually getting stronger and closer together.

My midwife came at about 6am and things were moving along, until I started throwing up everything I tried to take in, which was mostly water and Recharge. When there was nothing left, I was dry heaving. I felt like I had the flu, I was sweating and freezing, and basically totally miserable, even between contractions by Friday afternoon. I wanted to go to the hospital and get some anti-nausea medication and an epidural but I could not conceive of even getting dressed or getting in the car, so that was not really an option. Also, I reminded myself the whole point of having a baby at home was to avoid the hospital. I did not want a doctor poking a needle in my back… except I was starting to think maybe I did. I also didn’t want to have c-section… but then again at least that would mean the damn baby would finally be out of me. I never said these things aloud, mostly because I barely had it in me to talk, except to say “Puke” (which was code for “pass me the puke pot, I’m about to puke”), occasionally, “Don’t touch me” (mostly directed at Dan), or “Stop talking” (mostly directed at my mom).

Sometime Friday evening, I started to be able to hold down liquids, and then things started to move along a bit better. Of course this is all relative, as the baby wasn’t actually born until Saturday at 3:30 am. When she finally crowned, I thought I was going to die, I never felt pain like that in my life, but I was relieved because at least the hard part was over. Except it wasn’t. I was on my hands and knees in the birth tub and my midwife was urging me to stand up. Huh!? I thought the baby was supposed to slide on out now, but that was not the case. I stood up and leaned on Dan, and then I felt what really was the worst pain in the world.

Apparently our Sweet Pea had her hands up at her face and the cord was around her neck, so the midwife needed to do some fancy manipulation to get her out safely and quickly. Finally, she was out and in my lap, just staring at us and I could not believe we had created this perfect little baby. Who actually wasn’t that little, at 8 lbs, 8 oz.

Me: Yeah, it was intense.

Friend: I can’t imagine that kind of pain.

Me: I couldn’t either, there’s no way to describe it. It’s unbelievable.

Friend: So would you do a home birth again? 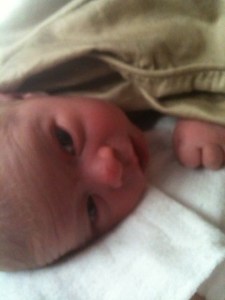