This weekend I celebrated my birthday. Do not misunderstand: I’m not saying one of the things I did this weekend was celebrate my birthday. I am saying I peppered the entire weekend with celebratory activities. Why everyone doesn’t use their birthday as an excuse to get friends together, eat cake, and do the things they love to is a mystery to me.

Friday night we were invited over to Dan’s parents for a birthday dinner featuring my mother-in-law’s chocolate pudding cake. It’s perfectly moist and cake-y on the outside and pudding filled on the inside, offering the joy normally found in raw cake batter minus the risk of food poisoning. There was one candle on the cake which made me wonder if I was old. It took me a while to think of something worthy to wish for before blowing out my candles, I mean, candle, because I already have everything I could wish for.

Saturday began with an eight mile run. I am still recovering from the half marathon, so I took it super easy and used some beautiful trails for my route. Without having to think about staying focused on a workout or a pace, I was really able to enjoy the opportunity to just zone out. I forgot how awesome that feels. At noon I showed up for a massage appointment. Do you know what is even better than a massage? Arriving at your appointment and being told a friend already took care of payment as a birthday gift. I was aboard the express train to Awesome town..

Saturday evening brought more Awesome with a 100% chance of strong awesomeness. The plan was for Dan to take me out to dinner at a surprise location. Getting ready to go out, I was pretty sure my purple backless dress was working for me, but I needed some confirmation. I asked my friend and her boyfriend who had come over to babysit,  “Is this hot or are you feeling the post-partum vibe?” Note to self: Don’t ever ask this question of a friend’s boyfriend. If he chooses the post-partum option, you won’t be happy. (Duh). But if he chooses the hot option, neither his girlfriend nor your husband will be particularly happy. Awkward starfish…  Lesson learned. 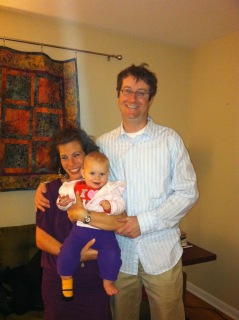 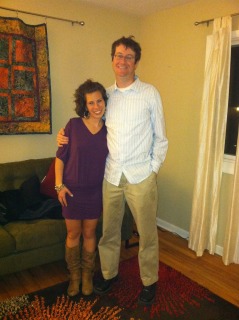 *Note: Dan ironed his shirt. This means he took my 34th birthday VERY seriously. While Sweet Pea is missing a sock, this has nothing to with the degree to which she takes my birthday seriously.

So… Dan took me to this place in Denver .  It was very fancy and baby un-friendly, which is what we were looking for. Highlights were the diver scallops, veal carpaccio, the braised short rib, the lobster bisque and the bottle of Malbec we shared.

Sunday I received my most awesome gift ever, from Sweet Pea- She slept till 7:10. In pre-baby time that would be like 11:30am. How refreshing to wake up after sunrise. I opened presents in bed (if you don’t do this on your birthday you should). Dan gave me a TRX!  They say muscle mass tends to decline beginning at age 35 if you don’t stay on top of your resistance training. So if I start now, at the premature age of 34, I will have a bit of a a head start, don’t you think? 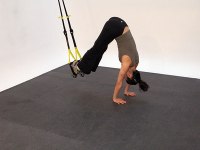 It continued to rain down awesomeness over brunch and birthday cake with a few girlfriends, followed by Dan’s parents coming over to watch Sweet Pea for the afternoon. I played the birthday card to get Dan to come shopping with me. Dan would rather be audited by the IRS than go shopping. But he did it without a fuss. That’s love, folks.

Best part: We got what we were looking for and now we don’t have to shop anymore. I am so excited about this awesome, comfy MCM chair!!!  (Note: “MCM” means “mid-century modern.” I had a whole conversation with a friend of a friend about how our house has the MCM vibe and she is kind of obsessed with MCM herself. I nodded vigorously though I had no idea what MCM was, but was too afraid to ask. I realized what it meant hours later. Now you won’t get caught in the same situation I was in).

We rode our bikes to the shop, so we weren’t able to haul it back but we should have it tomorrow. Next up was dinner at The Kitchen Next Door and browsing at the Boulder Bookstore. I didn’t get anything because I have a stack of books a mile high to read at home and I am still in the middle of The Secret Race and We Only Know So Much.

In short, my birthday was fabulous. And while I don’t need a birthday to feel grateful for all the good things and wonderful people in my life, it certainly doesn’t hurt.

2 thoughts on “Another Awesome Birthday.”