Do you ever have an argument with your husband and a day or two later, you can’t even remember what it was about? You remember how mad you were, how upset he was, but if, say, it came down to some government interrogation, the second they hinted at torture, you’d agree it was about the first thing they suggested, just because you didn’t have any better ideas and also, water boarding? No thanks.

This happens to me all the time. Not being interrogated, I mean having no idea what the fight was even about. I’m sure that’s something I should probably meditate about or something, but for now, I’m just going to add that to my to do list.

Like, the other night. I have no idea what happened. I’m sure I started it, because that’s how I roll, but how we got from the beginning to me wrapping my baby heads in layers of newspaper, I can’t exactly say. I think I might have accused Dan of hoarding too much old, useless stuff. It might also have been the same day I dug out a My Little Pony and my old charm necklace from my childhood for our daughter to play with.

All I remember for sure is Dan suddenly turning bright red and screaming something about how he can’t stand my stuff either, especially the ugly babies that he didn’t want to look at ever again. Then he turned and without even using a step stool or a chair or anything- yeah I might be a little jealous- and with his long arms, reached up to the archway at the entrance to our kitchen and took my chalkware down. I half expected him to throw it, letting them crash into an infinity of flesh colored pieces as they hit the tile floor, pieces that we would end up having to sweep up, laughing as we emptied the dustpan into the trash. But throwing stuff isn’t his style. In fact, raising his voice is not his style. Normally, he is the calm to my crazy.

But this time Dan had had enough. It had been a long weekend, most of which he’d spent removing carpet and drywall from our flooded basement. And I had not the good sense to avoid antagonizing the good man who had been doing manual labor all weekend.

He was already at his edge when I started in about his stuff, so it should not have surprised me when he lost it. He was tired of my rant and he was sick of looking at the strange babies that had decorated nearly all of my apartments since college. For over three years they had decorated our kitchen. For over three years, he quietly tolerated them while I loved them.

There they sat, on the kitchen table. The ceramic, bald, crying baby, and the baby with a top hat and a pipe sticking out of its mouth.

Neither of us said a word.

I broke the silence with a laugh. “Wow, you really hate the babies. I didn’t know you hated them so much. I guess I can let them go.” 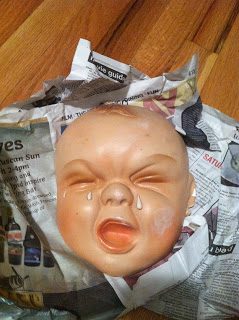