I posted a link to this story I wrote for the Washington Post on Facebook a couple of weeks ago, about lack of a national paid family leave program in the U.S. in the wake of pro runner Alysia Montano calling attention to Nike’s lack of a maternity leave policy. This was a few weeks after I’d posted a link to this article, in which I wrote about an issue close to my heart, food allergies, and how parents can support non-allergic siblings. 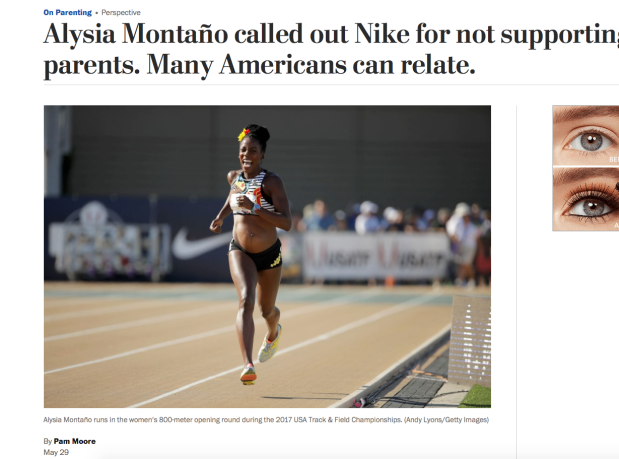 A friend commented, “You’re killing it!”

If only Facebook offered a “kind of” button in addition to like, love, angry, sad, and funny.

What my friend never saw were all the failures behind that success. For every story I write there are a dozen that are still pitches floating in the vast editor email abyss. And behind that particular story were heartache and insecurity I don’t talk about on Facebook.

I worked feverishly to file it on time.  After I turned it in I was exhausted and relieved. My bliss lasted a full 170 seconds. Then all my familiar fears made themselves at home in my brain. I was terrified my editor would hate it. I worried I hadn’t actually done what I’d said I’d do in my pitch. What if I’d gotten two of my sources mixed up? I told myself this was my normal Impostor Syndrome talking, to ignore it. I tossed and turned the night I turned it in, despite having been up late writing and revising the night before.

The next day, minutes before I clipped into the pedals of my spin bike to teach a lunchtime spin class, I glanced at my email. I found an unread message from my editor. My heart leaped like it was an unread message from a new lover . As I read the first few sentences, acknowledging the strengths of the piece, my heart sank, knowing a “but” was inevitable. My editor said I’d need to rewrite it unless I wanted to try and sell it elsewhere.

I called on my inner actress as I smiled and encouraged my spin class to work hard, stay positive, and have fun. I wanted to crawl into bed and pull the covers over my head. On my way out of class, I ran into one of my favorite spin class regulars, who also happens to be my rabbi. On an uncomfortable gray couch in the gym lobby, the rabbi served as both friend and therapist as I cried and told her how dumb I felt. I sincerely doubted I was up to the task of rewriting the story I’d worked so hard on. She assured me that I was and helped me talk through my ideas on how I could reshape it.

A week later the new version ran and I was happy again. Until  I received an email from someone at Nike who kindly informed me my facts were wrong. I felt sick. How could this be? I’d read, re-read, and took notes on the material I’d used for the article. Was I crazy? Was she right? Did I owe her a response?

I pulled up the video where I’d gotten some of my information and watched it once again with subtitles. The Nike person was right. My information wasn’t accurate. Again, I wanted to crawl into bed and hide, this time with some Tylenol PM. At least I didn’t have to pretend to be peppy for a spin class.  I emailed my editor to let her know of my error, hoping she’d understand and fearing she’d never want to work with me again. When I saw her reply, saying she’d make a correction, I felt my whole body relax.

I love sharing and celebrating my published stories on Facebook. The messy and unflattering backstory, not so much. Yet it’s those messy,  unflattering aspects of the journey where change and growth happen. Rewriting my story was hard. But I know it was better because of the extra work I put in. It’s something I am proud of not just because of the byline but because reworking it made it a strong piece of writing. And going forward, I know what questions I need to ask myself before I sit down to a blank screen.  And letting my editor know I messed up (on top of messing up in the first place)? Mortifying, yes. But it was also a chance to show her that I own my mistakes and that I want my reporting to be accurate. And next time I use background information from a secondary source, I won’t make the same mistake again. Would I have been happy had I turned in a good-enough version of this story in the first place, free of mistakes? Sure.

But my failures and my discomfort were what I needed in order to grow as a writer.  It turns out, grown-ups get growing pains, too. Before you can stretch to become a better version of yourself, you have to feel some pain first.

Subscribe to get the inside scoop on my reflections on all things body image, diet culture, and “enoughness,” links to the best stuff I’ve found on the web, book recommendations, and special offers. I’ll also send you my printable guide, 11 Things You Can Do Right Now to Feel Better About Your Body. CLICK HERE TO SUBSCRIBE